Last evening at the greenhouse was lovely.  Mild, a bit of a breeze.  Dean mowed as I weeded, watered, harvested a bunch of basil,  and then trimmed the tomato plants.  All the growing energy needs to go to the fruit, not all the leaves.  We may only have another 6 weeks of producing fruit before frost sets in.  As the sun sets, the owls hooted into the dusk sky and the late summer bugs hummed in unison.  And then the quiet.  I listen to the quiet, and the earth’s heart beat…  Leaving Boone Hollow Farm we were greeted with a yellow-orange moon.  The huge trees along the county roads seemed to glow yellow.  Was it from the moon, or is this the first signs of autumn? As we drove from the countryside in Defiance to our St. Charles home the moon seemed to get closer.  It is officially a full moon today, and it is called a “grain moon”.  Also known as the “green corn moon”, “barley moon”, 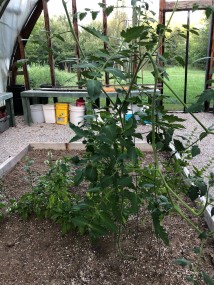 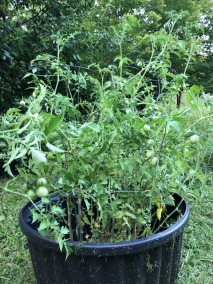 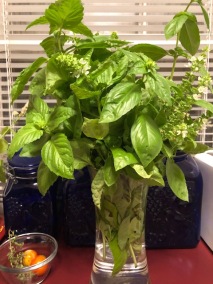 and according to the Farmer’s Almanac the August full moon is known as red moon based on its color illuminating in the hazy sky or sturgeon moon named after the large number of fish caught during this month in the Great Lakes region.  Here is a list of names for the moon from this internet source:  https://earthsky.org/astronomy-essentials/full-moon-names: