Dean & I are waiting to hear word about our access to electric for the greenhouse.  According to the electric co-op, the barn down the hill may not have enough ampage to heat, circulate air, and provide light in the nightime for our 1300+ square foot greenhouse.  We have redesigned the greenhouse so half will be a greenhouse (so 650 square feet needs electricity), and the other half will be a lathe or hoop house for raised beds of vegetables to grow 9 months out of the year.  I wanted to have those beds made already, with a winter crop of organic spinach, garlic, and root vegetables, but family matters have taken priority.  Alternative energy sources will be sought, if need be.  In the meantime our plants are sheltered in two different garages with “plant lights” and space heaters to be installed this week to keep them green and alive during this transition.  I dislike this in-between time, but did not have the heart to let the hard freeze kill the green life we have cared for this past year.  Cannot believe, but it will be 1 year mid-November when we bought the greenhouse and adopted everything in it.    Do you have any ideas for alternative energy sources in Missouri?   Please share. 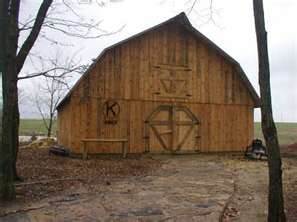 … I love the year’s decline, and love
Through rustling yellow shades to range,
O’er stubble land, ’neath willow grove,
To pause upon each varied change …
Now shatter’d shades let me attend,
Reflecting look on their decline,
Where pattering leaves confess their end,
In sighing flutterings hinting mine.
For every leaf, that twirls the breeze,
May useful hints and lessons give;
The falling leaves and fading trees
Will teach and caution us to live…

These verses are from a poem “Autumn” written by John Clare (1821).  I walked down the Clayton street to another building on campus for a training class this morning.  I felt and heard the autumn winds in my hair and the rustling leaves.  In the wind I feel  my father’s presence.  Autumn was his favorite season.   Brain cancer did not win, as my father has eternal life with Jesus.  I had to go out again at my lunch break, just so I could feel the winds and know my father is present in my day.   Did you know, my Dad, you built so much of my character and personality?   That steadfastness, strong, and stubborn characteristic I shared at the ceremony in your honor on Saturday, but tenacity would be another trait I forgot to mention.  This greenhouse business, Deanna Greens and Garden Art is requiring tenacity.  It is a sunny, warm, and blustery October day, with another cold front meeting with the current 80+ temperatures which will produce  storms in a few short hours.  I see the clouds coming from the west.   A 40+ degree drop in temps is to come this evening.  Dean & I moved many plants to safer shelter last night.  Up into the wee 1:00am hour.  We have been in the process of moving for weeks, and have found homes for many of our tropicals.  But my potted geraniums, wandering jews, swedish ivy, and other hanging baskets needed to be someplace warm.  The greenhouse rebuild has come to a halt with the question of electricity ampage for heat, fan, and light resources.   Dean met with an engineer from the electric company. Our prayer is that the barn down the hill from our greenhouse has 300 amp, so we can connect.  Waiting for an answer as we have permission to do so from the landlord.  The side walls and plastic liner should be completed this week, delayed a week for more important matters such as my father’s funeral.  See the lovely autumn canvas from my parents’ home in Pike County, the photo taken by my cousin during our gathering in Dad’s honor on Saturday. 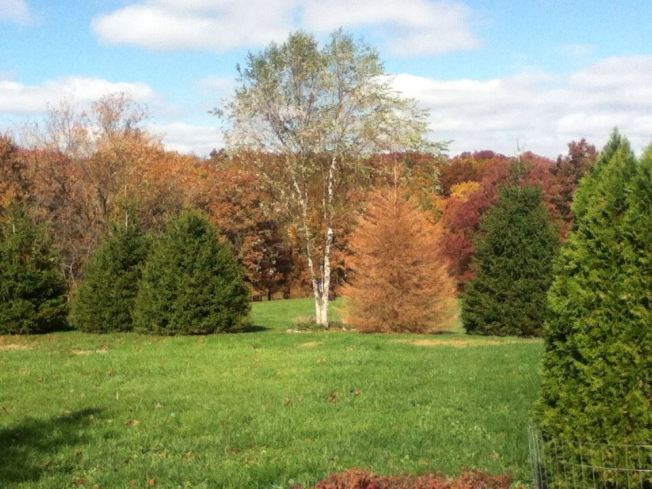 My father’s obituary … more thoughts in a few days …

He was born March 10, 1936, the son of Earl Kenneth and Anna Susanna Kurz Bates. He grew up in St. Louis County and on April 26, 1958 in St. Louis, he married Darlene Hudson.  She survives. Also surviving are his father of St. Charles; two sons Martin Richard Bates and wife Joan of O’Fallon, Stephen Kenneth Bates of Bowling Green; two daughters
Margaret Bates of Los Banos, CA, Anna Gall and husband Dean of St. Peters; five grandchildren; 5 great grandchildren; one brother Earl F. Bates and wife Sunny of the State of Montana and one niece Julie Fait and husband Jim of Romeoville, IL.  He was preceded in death by his mother,
his step-mother Paula Bates and one nephew Drew Bates.

Mr. Bates lived in St. Charles County for 43 years where he owned and operated Bates Nursery in St. Peters from 1969 to 2002 when he retired.  While owning the nursery, he raised many of his own plants, and did landscaping.  In 2003 he moved to Bowling Green.  Martin was an avid hunter, loved his hunting dog Midnite and enjoyed training dogs. He also enjoyed woodworking and painting and sketching.  He was a good husband, father and grandfather and was a member of Trinity Episcopal Church in Hannibal.

Memorials may be made to the Donors choice.

My Elisabeth and her Mark tied the knot on October 15 with  a private wedding ceremony.  Their witnesses, her sister Rachel and his brother Brian captured this moment at the Train Depot along the Missouri River in historic St. Charles, MO.   Blessings to my daughter and son-in-law! 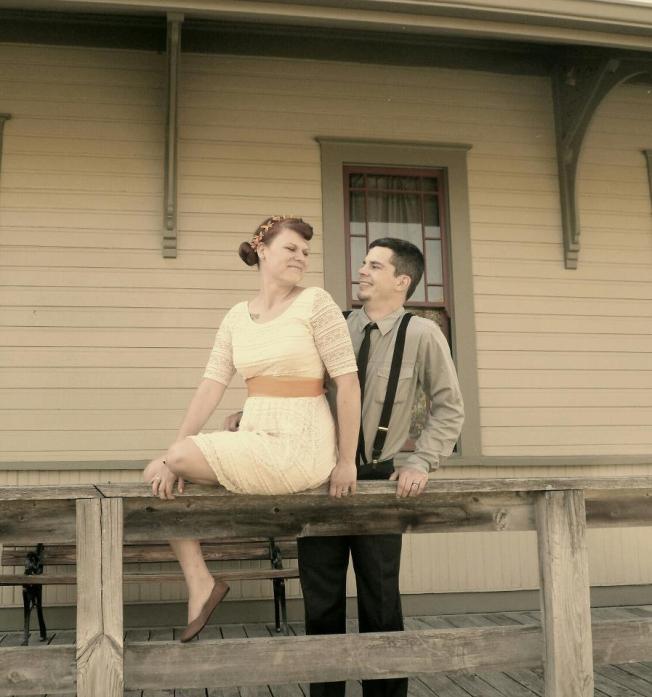 Despite a miniscule budget and this season of grieving, by God’s grace I will create vignettes and will remain a perennial optimist (as Word Press blogger, Kate of Believe Anyway calls herself).  Big is our God!  He has big Forgiveness, big Grace, and big Love!  There are no boundaries with His many gifts and blessings! 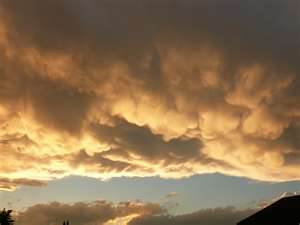 “Happy clouds” and “happy trees” are what painter, Bob Ross would paint on his canvas.  Do you remember this PBS program? 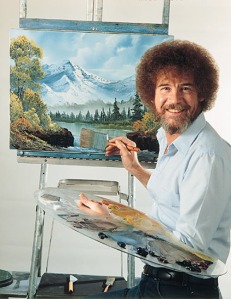 Well as “happy” as his objects were in his artwork, life is not always so happy.  This week I have had a difficult time being “happy”.   Too much going on to enjoy life.  Dad terminally ill, both my grown  daughters with major disc and back issues possibly genetics, a greenhouse needing to be completed before a hard freeze comes, working full-time in a job with a pay freeze for 4 years now, and starting to take on weekend catering jobs as the greenhouse sales have ended for the season.  I am just plain tired and I am grieving!  I know, I have much to be thankful for.  Family, jobs, and the abiity to work.  But I remind myself of the holy scriptures,  John 16:22 – “So with you: Now is your time of grief, but I will see you again and you will rejoice, and no one will take away your joy.” (NIV)  I am holding onto God’s promise. 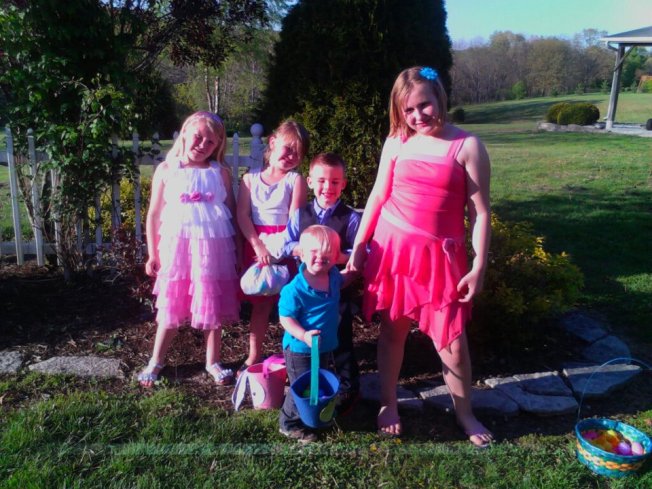 So these are my grandchildren, Libby, Ella, Brendan (in the back) with Eli and Hannah (in the front).  Yes, they are mine alright.  They are loud and rowdy when they get together, like they had not seen each other in ages and catching up with each other’s news.  They see each other fairly often as their mothers are best friends and sisters.  I love my grandchildren despite their loud presence.  I have actually learned to relax with children as I get older.  It is guaranteed, they will bring a smile to my face and make me belly laugh when I am with them.   Angels they are not, unless they are sound asleep on their pillows.  This photo was taken on Easter at my parents’, their great-grandparents’ home in Pike County, Missouri.  Libby is a precocious 8-year old, smart as a whip, and will say things as she sees them.  She is a sponge with science subjects such as plants, likes to garden and camp.  Libby thinks she is the ultimate authority on some matters; therefore, it is her parents, grandparents, aunts, uncles, and teachers who instruct her differently with her reluctance.  School of hard knocks, you know.  She reminds me of her mother, my daughter Elisabeth.   I adore them both.  Then there is 6-year old Ella.  She is one investigator, discovers and researches things.  Inquiring minds want to know!  She is a peaceful child, though can let stubbornness ruin “the  moment” unless Mom or Dad steps in.  Ella resembles me in so many ways.  My Dean calls her “Mini Anna”.  Then there is the 1st born grandson, my 5-year old Brendan.  Reading in full sentences since age 4, on the go as a new adventure character, wrestling with Dad, yet makes time to cuddle with Mom.  Now there is one long word to describe 2-year old Eli … whirlwind!  Maybe another word … tornado!  Eli is into everything!  And definitely has those “terrible two” moments.  But he will bring a smile to my face when he says “I like ‘hot cream'” rather than ‘ice cream’ or when he sits next to me and wants to read a book.  Well, I just love to read to children, especially my grandchildren.  And finally, there is my 1st grandchild, Hannah who will be 11-years old in November.   Her nickname “bug” dubbed before she even walked fits her well.  Hannah loves nature and animals, bugs included.  I have a ladybug stepping stone her mother and her designed for me when she was a preschooler.  Hannah is a “social bug” now, loves to be in the know of the raising teenage movie and singing stars, and has limited access to online chats.  I imagine a cellular phone would be her 1st choice for a birthday or Christmas gift.  See if Mom & Dad are ready for that yet!?  Meantime, journaling and creating art are great outlets for her.  Mine, five wonderful grandchildren! 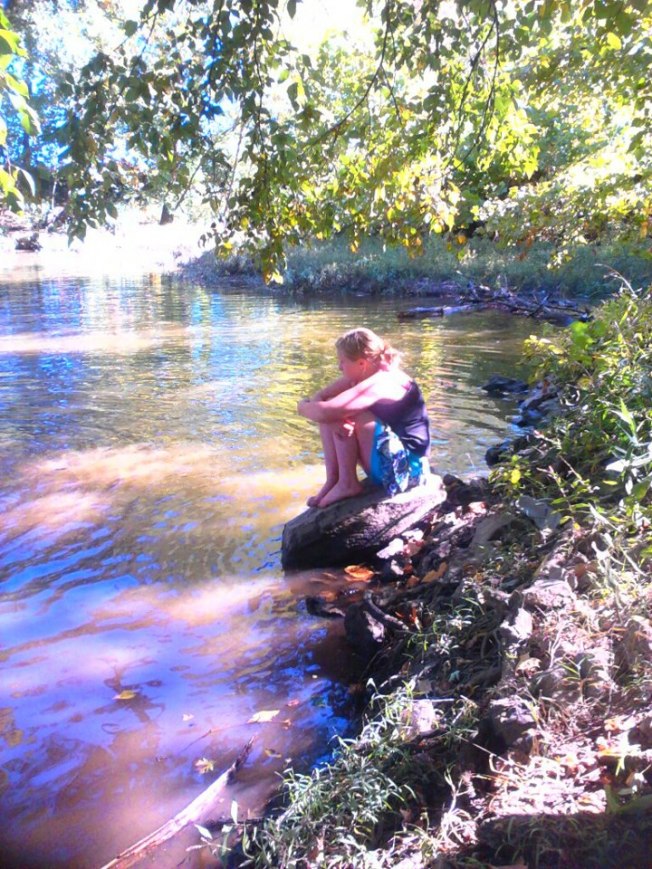 In this photo my oldest granddaughter, Hannah enjoys nature at the St. Francis River as a solitary being.  Yet with nature we are never alone, more beauty to behold and life to cherish.