I use my abundant, pungent arugula in my salads as well as egg, pasta, and rice dishes these days.  A little goes a long way, so most of my culinary creations as of late include my fresh grown arugula. One important aspect to the culinary arts is that improvisation goes a long way. It is easier to substitute ingredients with cooking versus baking.  I find arugula can be used in place of spinach in most dishes and salads.   There is a taste difference with these 2 greens, but cooking properties similar. Arugula like spinach is a great source of vitamin A and C as well as potassium, calcium, and magnesium.  Arugula grows much like spinach, spring and autumn sowing here in Missouri.

I love creamed spinach! The best I ever had is crafted by the executive chef Gerard Germain. I learned much from the culinary experts while working at Dierbergs School of Cooking.  Chef Gerard dazzles his students’ appetites with Italian and French cuisines. A first generation French immigrant applies his old world culinary magic in the kitchen of a fine Italian establishment in St. Louis called Tony’s. The next best thing is spinach in a white sauce over pasta.  So here is my attempt to a lighter version of Pasta alla Fiorentina … Pasta Arugula (or the Italians say rucola), but my recipe is American-style.  I lessen the butter and use a little olive oil as a base for the slurry as well as use whole milk instead of cream or half & half.  Of course, arugula goes in the recipe instead of spinach.  Noted for the recipe this evening, I cooked too much whole-grain pasta for the amount of white sauce I made, and did not add enough arugula.  Fresh arugula shrinks considerably while sauteed. Tonight I served the Pasta Arugula with locally-made chicken Italian sausage and crusty bread.  I sipped a glass of lavender sparkling water,  and Dean downed a domestic beer this rainy summer evening. 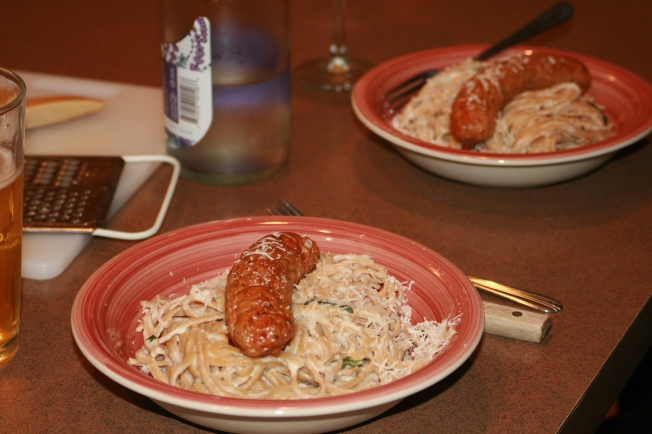